This week I interviewed Maurice Broaddus, an urban fantasy author with dozens of published short stories to his credit and a novel trilogy titled, The Knights of Breton Court. We discussed the annual writing convention he hosts called Mo*Con and held in Indianapolis, IN.

How did Mo*Con come about?

Mo*Con came about for 3 different reasons.

First, my wife wanted to experience conventions and the thought was to create a convention that she could experience firsthand.

Secondly, at the conventions I attended I had great conversations with other writers and I wanted to replicate that experience in a room party environment as the convention itself. The conversations were relaxed and covered a wide range of topics from religion, politics, current affairs and of course writing.

Third, I wanted to do a writing convention at a church and Mo*Con was a prime opportunity to do this. At the time, I was running a local church and I basically wanted the church to be a safe place for these types of conversations.

What prompted you to name the convention Mo*Con?

A friend of mine—Chesya Burke—knew I hated nicknames. Mo, being a nickname for Maurice lead to the name Mo*Con. From there it just seemed to stick.

In the beginning, Mo*Con was a one man operation. I ran everything by myself until a friend suggested that I look to other sources of support to make the convention happen.

I have partnered with organizations such as: Cities of Refuge, Broad Ripple United Methodist Church, Community-supported.org and Indiana Horror Writers (IHW).

Who is the intended audience for Mo*Con?

All are welcome, but primarily those who are interested in hearing writers speak on social issues and the intricacies of their craft. Those most involved consist of horror and fantasy readers and writers. However, we want to spoil writers and celebrate their contributions, while involving the community.

How do you see Mo*Con evolving in the future?

It’s an ongoing process. We’ve had everything from a Celtic Rock concert, a puppet show and a horror writer who delivered a sermon at the church. We intend to let it evolve organically and simply see where it takes us. 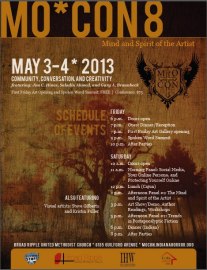 So, if you’re in Indianapolis during Mo*Con do yourself a HUGE favor and stop by on Friday, or better yet go ahead and RSVP purchase your tickets now!The event will be held at Broad Ripple United Methodist Church in Indianapolis from May 3-5, 2013. Full registration price is $75. If you can’t make it but would like to support Mo*Con, why not become a non-attending sponsor.

For more information, visit: http://mocon.indianahorror.org/ or