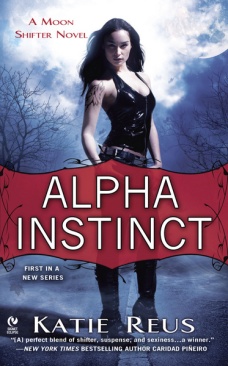 The vast majority of Paranormal Romance and Urban Fantasy novels center on vampires.

But what about the Lycan, sometimes known as the Shifter or more commonly regarded as the Werewolf? I personally am more inclined to read a novel centering on a shifter, more so than a vampire.

Because vampires are everywhere and shifters are WAY cooler!

That’s why when I stumbled upon Alpha Instinct by Katie Reus, I was immediately intrigued. As if the subject matter wasn’t enough, I was hooked by the character development and plot, of what I consider a very well-written paranormal romance/urban fantasy.

Fear has a scent. So does desire…

Ana Cordona has been a strong leader for the lupine shifters who survived after all the males and most of the females in her pack were mysteriously poisoned. As tough as she is, with no Alpha male, the pack is vulnerable to the devious shifter Taggart, who wants to claim both their ranch and Ana as his own. When Connor Armstrong comes back into her life, promising protection, it’s almost enough to make Ana forget how he walked out on her before—and reluctantly accept his offer to mate.

The minute Connor sees Ana again, it reawakens a raw hunger. He must have her for his bondmate—his wolf cries out for it. But his human side knows he must proceed with caution because of their complicated past. If he is to truly have her body and soul, he must go beyond his burning desire and win back her heart. Whatever it takes, he is determined not to leave her side again.

But Taggart and his rival pack are not their only enemies. A human element in town is targeting shifters. Their plan not only threatens Ana and Connor’s future, but the lives of the entire pack…

I enjoyed reading this novel and was never bored from start to finish. Reus delivers a fast-paced, action packed story, which contained the right amount of action, mystery, suspense and romance. Her characters are interesting and dynamic. The novel’s premise starts out fresh, but shifts (no pun intended) as the story progresses.

The pack dynamics are well defined and give the reader a glimpse into the Shifter Hierarchy.

Alphas are most dominate and stronger than average shifters. All true Alphas were also warriors, but warriors weren’t always Alphas.

Warriors are the larger, battle ready class of shifters. It is their job to protect the pack.

Betas are the smaller, meeker class of shifters who are more domestic and maintain the day to day workings of the pack.

Enforcers are another warrior class of shifters who work for the Pack Council and act as magistrates for rogue shifters and any other instances where Pack Law might have been broken.

The classes are not gender specific, so that both males and females can be considered of the Alpha Class.

I found the relationship between Ana and Connor to be interesting and plenty heated! The love scenes are somewhat explicit (something I enjoy) so, WARNING TO THE EASILY OFFENDED!!!

There were plenty of sub-plots to keep me interested throughout. A clever one deals with Connor’s younger brother Liam who meets and instantly recognizes December—who happens to be human and the sister of the town Sheriff, Parker—as his mate.

His attempts to woo her are undermined by December’s over protective brother, whose suspicious nature towards shifters further develops into an interesting backstory of the shadowy history he and December share.

Another sub-plot involves a group of haters called the Anti-Paranormal League (APL) who are organizing with a goal to rid the world of all shifters. An interesting facet of Reus’ world—similar to Faith Hunter’s Skinwalker series and Laurell K. Hamilton’s Anita Blake series—is that humans are aware of and interact with shifters and vampires. This creates a prejudicial tension which is exemplified by the Anti-Paranormal League. It’s hinted in the novel that the APL will play an even larger role as the series progresses.

Thirdly, a psychotic killer is on the loose and is stalking the shifters in hopes of exterminating the entire pack. The identity of this killer remains unrevealed until the conclusion of the novel.

In conclusion, I found Alpha Instinct to be a very enjoyable read and start to the series, and while it didn’t quite possess the raw witty charm of Hunter’s Skinwalker series or the murder mystery intrigue Hamilton’s Anita Blake series started out with; it did deliver enough to keep me vested in it.

Book two in the series is titled, Primal Possession and in an interesting structural concept of the series, it explores the relationship between Liam and December.

I definitely recommend this novel to fans of the genre looking to invest some time in a new series!