Today I woke up and said a prayer for the friends I’ve lost over the past two days. Emotionally, I can’t truly describe how I’m feeling right now. Hurt, numb, surreal, confused, angry, sad/depressed…that’s just the tip of the iceberg. As a writer, the act of writing is an expression of self. It paints a picture to the reader of who and what I am. It reveals the inner workings of my mind, body and soul, as best as words can describe them. I’ve come to discover in my lifetime, that despite my rather large vocabulary, there are not always words which can accurately convey the emotions I’m experiencing at a given moment.  I can usually come close, but it’s never quite accurate.

Since learning of the passing of my friends, I’ve been grappling with a hollow feeling in the core of my soul. The shock of their sudden deaths have me reeling in my grasp of the enormity of it all. Renae Allgire was one of the kindest, sweetest and gentlest souls I ever knew. From the time I first met her (just shy of a year ago) she welcomed me into the IHW with open arms. Her warmth, respect and sincere kindness were deeply appreciated. Renae always had kind words of support and encouragement. She believed in my talents as a writer, but most importantly she believed in me as a person. I remember the very last exchange between us on New Year’s Eve. It was as pure, heartwarming  and sincere as could be.

ME: On the eve of this New Year, I intend to reflect upon the great moments I’ve enjoyed this year, pay tribute to those I lost and learn from my mistakes. I was afforded the opportunity to meet a lot of great people in 2012, some of which have grown to become my closest friends. I’ve reached out to old friends and through it all I’ve grown as a person and as a writer. I want to thank my family & friends for your support of me both personally and as a writer. I LOVE YOU ALL! I INTEND TO MAKE 2013 A GREAT YEAR & MY YEAR TO SHINE! HAVE A HAPPY NEW YEAR, MAY GOD BLESS EACH & EVERY ONE OF YOU!!! REMEMBER TBIYTC!!!

RENAE: Very nicely said John, I count myself fortunate to have met you during 2012, and hope that our friendship carries over into the New Year and continues to grow. May your New Year be filled with success, happiness, love, laughter, and good health. ~ Cheers my friend~

Yesterday, Sunday, 6 January 2013, I received word that my friend of nearly 30 years, Dwayne Hackett, died suddenly the day before. Already reeling from Renae’s sudden passing, I was now confronted with the passing of a man I’d known for more than half my life. I choke back the tears and sorrow, even as I write this post. For years we’d known each other, been through the things that kids go through together. Argued over comics, sports, girls and laughed over those same things. As time progressed, we went our separate ways and lost touch with each other. However, through facebook we reconnected and kept in touch almost daily. I got to know his son and through mutual friends, we came together for the first time in twenty seven years. It was a very special night, and one I’ll never forget. We took pictures, laughed and talked about the old days and fun times. We picked up right where we left off so many years ago. I had no idea that that night would be the last time I’d ever see my friend, or spend any time with him.

Dwayne and I shared a love of movies, music, comic books and the Indianapolis Colts. He was a supporter of my artwork and writing, who always encouraged me to pursue what I loved. He always hyped me up to anyone who would listen. He was a member of the IHW facebook page and my facebook group The Media Man Forum. He always had a joke, and could make me laugh even when I didn’t want to. Losing him and Renae hurts. As the tears of sorrow roll down my face, I have to honor their memory and recount the joy it was to know them and share the time I had with them. I believe in a lot of ways I was better for knowing them and gained so much by having them in my life. 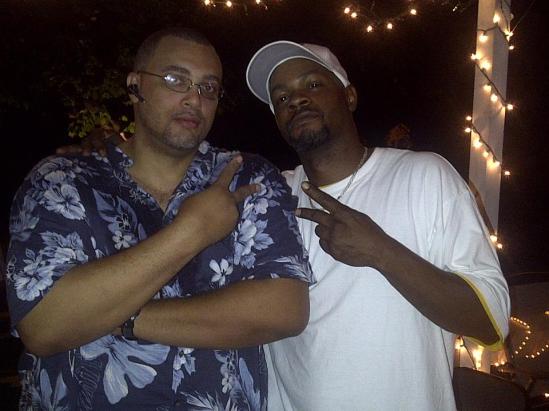 Renae Allgire and Dwayne Hackett, I SALUTE YOU! I LOVE YOU BOTH & I MISS YOU DEARLY! GOD BLESS YOUR SOULS & YOUR FAMIIES!!!